I am genuinely torn on the issue of dog breeders. On the one hand, I love dogs, and I have a fondness for particular dog breeds, and it’s the responsibility of breeders to produce more of those dogs so people like me can take a puppy home to treasure and train. Many breeders are lovely, responsible people even if they don’t know enough about population genetics to prevent inbreeding. While some breeders may view their studs as assembly lines, many do genuinely love their charges and take care to properly house and socialise their dogs and puppies.

I’ve put that disclaimer there. There it is. See that disclaimer? If you’re a dog breeder who loves your dogs, takes good care of their health and their need for companionship, and values the health of your dogs over their appearance, then you need not take the following rant personally in any way.

You might do so anyway, but as far as I’m concerned, I’ve covered my arse.

The adorable 9-month old rescue Rottweiler girl that we just adopted (blog post and pictures to follow) has slightly longer hair than Amos does, and it reminded me that there are long-haired Rottweilers in the world. Curious, I did a little research. It turns out that the long hair is a rare, recessive gene; it is not linked to any health issues.

How cute is this guy? Photo from Molosserdogs.com

It is considered a “fault”. In show-breeding, that means the breed does not meet the standard. You really can’t show that dog, and most breeders will insist that if you take a long-haired rottie pup, you desex that dog when it comes of age so that it does not breed.

Let’s recap, because these concepts will return:

(a) long hair is part of the natural variation in the breed, i.e. it is not caused by outbreeding.

(b) long hair is not linked with poor health on the part of the animal.

(c)  For a recessive trait (like long hair) to express, you need two copies of the relevant allele, meaning one from each parent.

While apologists may argue that long hair is not necessarily very practical in a “working dog”, this can easily be rebutted by pointing out the numerous working dog breeds with long hair (oh, so many: border collies, long-haired german shepherds, mountain dogs, Old English sheepdogs…) and the fact that show dogs don’t tend to do a lot of work requiring a neat army buzz cut.

The production of long-haired rottweiler puppies means that both the parents have one copy of the long-haired allele. The breeder might decide not to repeat that cross, but they’re generally going to keep breeding those specific dogs to other dogs. This means that the carriers are still going to pass on that long-haired allele (50% chance per pup per parent with the allele).

This in turn means that not breeding the long-haired rotties does absolutely nothing to reduce the frequency of the allele in the population; it simply fails to increase it. As an attempt to remove genetic diversity from the population, it is both misguided and astonishingly ineffective. Even if it were effective, you would not only be removing that cosmetic change, but all the other genetic diversity linked to it, and purebred dogs can’t afford to lose any genetic diversity that doesn’t have a health cost.

So at this point I’m wondering why anyone – anyone – gives a crap if a rottie has long hair. They can still have the physique preferred for the dog. They’re still intelligent and loyal and strong. They still look like a rottie. Most importantly, they are healthy. It might be a bit tricker to comb for ticks and remove burrs, but otherwise, I’m drawing a blank. Maybe it makes it harder for judges to give points to a dog if there’s too much variation in the breed and they have to pick one variant over another.

I’m starting to take issue with the word “fault”.

The long-haired issue, however, is dwarfed by the issue of “red Rottweilers.”

Another gorgeous one. Photo from the Rested Dog Inn at http://www.resteddoginn.ca/redrescue.php

These guys are fricking gorgeous, and they are, if anyone is curious, purebred rotties. Coat colour is a very complex polygenic trait. “Black with tan points”, the colour pattern one finds in rottweilers, is in itself the product of homozygous recessive genes that are fixed in the rottweiler population. All rotties have two copies of that allele.

In order to produce the “red” rottie (although I’d argue that’s more of a brown or liver colour), another gene needs to be altered. Once again, the alteration resulting in this colour is recessive and, much like the alleles for long hair, it’s quite rare in the population.

Again, the red coat is considered a fault. I curiously read more on this and came upon a rabid drool-flecked mouth-foaming rant on the subject by someone associated with the American Rottweiler Club, who used the phrase “corrupt the purity of our breed.”

They also stated that a breeder who sells a “red rottie” is to be considered “unethical,” because that dog can’t be shown and that such dogs should never, ever be bred. Furthermore, they said it was a sign of inbreeding.

Well… sort of. That’s hard to argue if you don’t know the incidence of the gene in the population. The best way to see if your dog is inbred as hell (other than assuming that purebreds are always inbred as hell, which is true to a point) is to look at the pedigree. If you can, go back more than the standard three to five generations. The only differences between a red or long-haired coat and a congenital internal recessive defect are that you can see the cosmetic changes and they’re not unhealthy. It is true that if you tried to breed for long hair or recessive coat colour, you would eventually create a highly inbred line. As the occasional result of a mating, it’s not a problem.

Then they tried to argue that this coat pigmentation is linked to problems in cardiac, eye and skin health.

“Gosh,” I thought to myself, “that sounds dire.”

Given that I still possess access to the university library, I signed onto Web of Science to do a little bit of a literature search for any studies showing a link between this particular pigmentation and any health problems.

Problems with white pigmentation have been heavily documented and researched elsewhere. A dog being brown instead of black… not so much. I tried every variation of keywords I could think of, and still…

“Hrm,” I thought to myself, “that coat colouring looks familiar.” 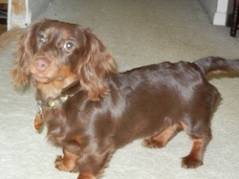 A photo from a nice website on coat colour genetics in this breed. http://daminidachshunds.weebly.com/dachshund-color-genetics.html

“I wonder if it’s linked to health problems in those breeds? It’s clearly considered not a fault in those.” 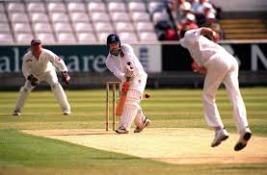 (look, I was getting tired of orthopteran insects, but the principle remains)

Now, in the interests of genetic honesty, it is possible that a particular condition might be linked to a health problem in one breed and not another, given how rapidly genes become fixed in these very small populations. It is possible.

But it’s not damn likely.

That makes it recap time!

(a) The red coat is part of the natural variation in the breed, i.e. it is not caused by outbreeding.

(b) The red hair is not linked with poor health on the part of the animal, and any attempts to state otherwise are clearly apologetics based on zero goddamn evidence and very likely confirmation bias (cf. confirmation bias: “This particular red rottweiler has a skin condition! I knew they were unhealthy!”).

(c)  For a recessive trait (like the red coat) to express, you need two copies of the relevant allele, meaning one from each parent.

The closest possibility is that the red coat appears to be strongly associated with lighter-coloured eyes, which are a bit more sensitive to sunlight. I have blue eyes. I relate. It’s really not something that affects my life in any major way.

In the cases of long hair and red coat, which are purely cosmetic differences as far as the dog is concerned and do not affect the strength, health, or conformation* of the animal, it is not possible to remove that diversity from the population without a genetic test to see if a parent dog carries the gene (except to, perhaps, make a note of it when these bundles of joy do turn up).

Trying to remove an allele from the population without having the faintest idea how to do it? 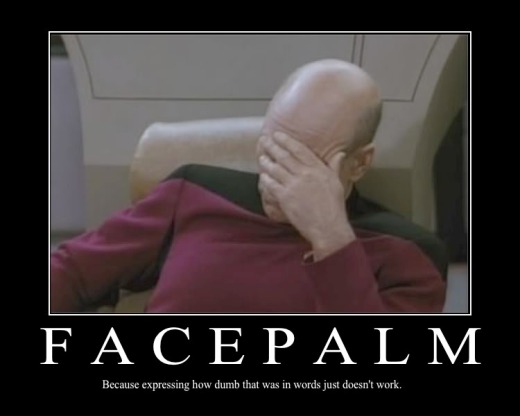 Referring to the presence of a slightly different coat colour as a corruption as though it was best cast into the fires of Mount Doom? (“One phenotype to rule them all…”)

This does not make sense. Breed standards exist for a reason, but they have gone well beyond that at this stage. I think it’s exceptionally telling that kelpie breeders in the U.S. refuse to allow their breed to be registered because they are concerned that their breed will be destroyed by show breeding. That is an entirely fair concern. I think it’s telling that the U.K. German Shepherd breed standards have been altered to consider that horrific sloping back a fault rather than a desirable trait.

You have got to be fucking kidding me.

Emphasising the health of the animal should never be controversial.

So if you see a long-haired or red rottie pup for sale and you melt into a pile of dog-adoring goo, be dissauded perhaps by the enormous responsibility of owning a large dog, or a dog at all; by the huge amount of work they are; by the possible vet bills you may be signing up for; but don’t, even for a second, be dissuaded by the mouth-breathing rants of breed purists.

*(don’t get me started on conformation; it’s like the word “holistic” – it has an actual, useful meaning, but mostly people who use it don’t mean it that way at all)

—-
P.S. When we got Amos as a puppy, I used to spend some time reading and researching things on a rottie enthusiast forum in a search for behavioural tips, until we found our current trainers. I’ve since stopped reading this forum because I am so tired of people talking about “For the BREED!” without actually meaning anything when they say this.